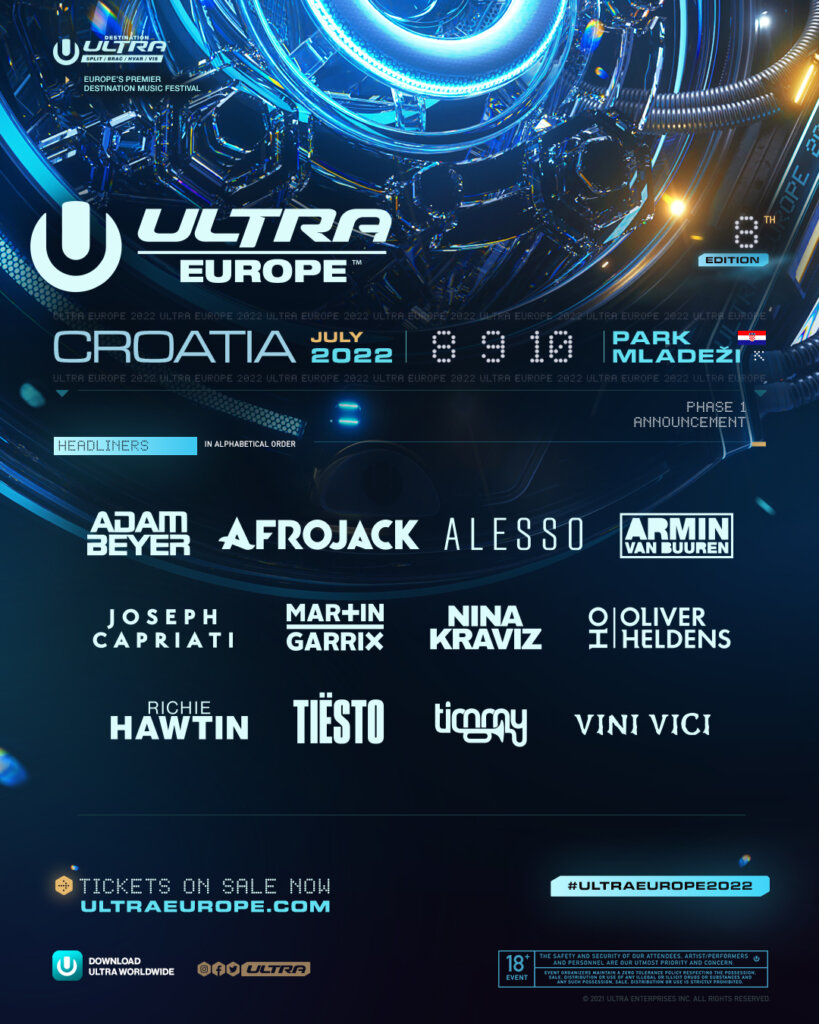 TIER 1 TICKETS ARE SOLD OUT!

After already selling out of Tier 1 tickets, ULTRA Europe has unveiled a stacked Phase 1 lineup of headliners performing at Park Mladeži in Split, Croatia from July 8 –10, 2022.

Martin Garrix, who was ranked number one on DJ Mag’s Top 100 DJs list for three consecutive years, will return to ULTRA Europe following his stadium-smashing performance at the festival in 2017. At every one of the high-energy performances, Garrix showcases his intrinsic capability to uplift and connect with his audience.

Grammy-nominated Armin van Buuren, who similarly claimed the number one spot in DJ Mag’s annual Top 100 DJs poll for an unprecedented five times,has been heralded as one of the electronic music’s most esteemed artists for more than twenty years. He will continue the beloved tradition of headlining the festival with an explosive Main Stage, set complete with show-stopping fireworks.

Grammy award-winning, platinum-certified, international icon Tiësto has been hailed as “The Greatest DJ of All Time” by Mixmag, “#1 DJ” according to Rolling Stone, and “The Godfather of EDM” as proclaimed by Billboard.. From his timeless dance floor bangers to his high-profile Las Vegas residency and crossover success, Tiësto defined the blueprint for what it means to be a all gsuccess in today’s dance music world.

DJ, producer and live instrumentalist Timmy Trumpet will make his ULTRA Europe debut with an undoubtedly explosive performance. The award-winning, multi-platinum recording artist is known for his memorable melodies that range from hardstyle to electro-house and pop, all of which, of course, are complemented by his live trumpet playing.

ULTRA Europe veteran and superstar DJ Alesso is one of electronic music’s most celebrated performers, and promises to serve up a high-octane set on the Main Stage.

Dutch future house vanguard Oliver Heldens boasts more than one billion cumulative Spotify streams to his name, and will deliver a show-stopping set during his first-ever ULTRA Europe performance.

Few acts have such a well-defined signature sound as psytrance innovators Vini Vici, and the creative duo are sure to mesmerize fans as they return to the ULTRA Europe stage following their magnetic 2018 performance.

ULTRA Worldwide’s esteemed techno and house concept RESISTANCE will once again showcase the festival’s darker shades of underground sounds. Stockholm-based DJ Adam Beyer continues to pull on the heartstrings of modern techno like few others can. The internationally-renowned Siberian selector Nina Kraviz will also make her debut performance, and is sure to dole out her unmistakable, experimental soundscapes. Italian underground virtuoso and ULTRA Europe fan favorite Joseph Capriati will once again showcase his beautifully melodic sounds, and three-time DJ Awards winner Richie Hawtin is ready to bring back his unique landscape of minimal yet highly-danceable techno.

ULTRA Europe is ready to set the bar higher than ever before and treat fans to a once-in-a-lifetime travel experience, with numerous production surprises in store.

Tier 1 tickets are already sold out, and Tier 2 tickets can be purchased on the official website at price for €149 for three-day GA ticket. ULTRA Passport holders can purchase the Passport Pack and secure 6 tickets for the price of 5.

ULTRA Europe is also offering the ultimate seven-day Destination ULTRA ticket for €339, which will grant access to all events during the Destination ULTRA week – including an exclusive opportunity for the first 250 purchasers to attend the ULTRA Europe Sunset Family Dinner on Island of Vis before the Closing Party starts.  Be sure to get your ULTRA Europe tickets today, and be a part of the world’s premier destination music festival.

Tickets on sale now at https://ultraeurope.com/tickets

A full breakdown of locations, parties and tickets for each event can be found here: https://ultraeurope.com/tickets/